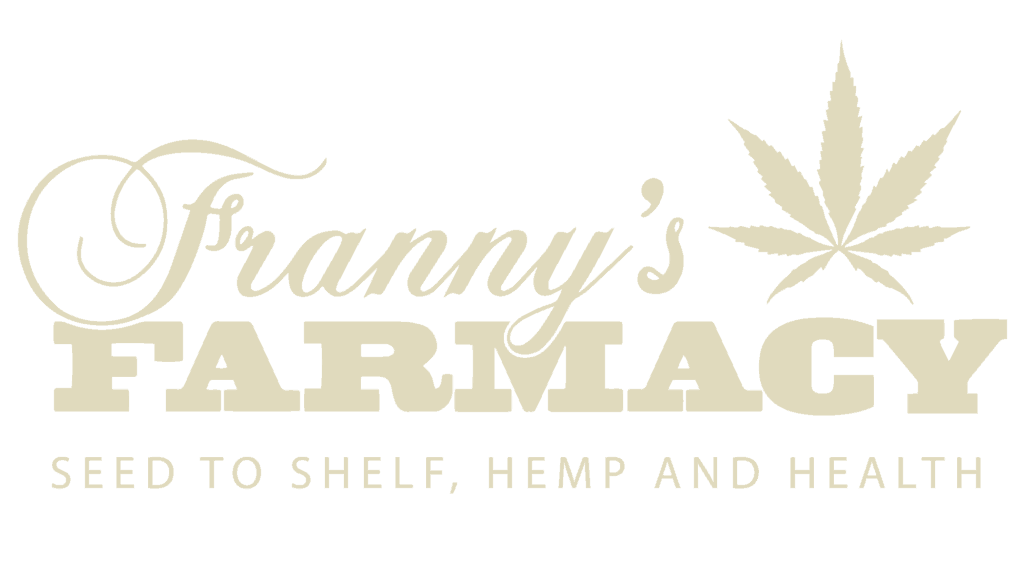 Unfortunately, we are not shipping internationally at this time.

Can I return a product?

How long does it take to receive my purchased items?

At Franny’s Farmacy, we take pride in our shipping speed! You can expect a delivery time of 2-3 business days after purchase. Please note that processing your order may take up to 2 business days. Tracking information from the carrier might not be available immediately.

Does Franny’s Farmacy ship to all 50 states?

Yes. We ship our proprietary organic hemp oil extracts to all 50 states. The United States Farm Bill of 2014 classified industrial hemp as containing less than 0.3% THC. Because Franny’s Farmacy products contain less than 0.3% THC, we are allowed by U.S. Federal law to conveniently ship to your doorstep.

Can your CBD Salve separate during shipping?

Yes. We only use organic ingredients. This means some separation is normal during the shipping process. Please allow item to settle to room temperature. Please note, the separation does not affect its potency.

Cannabidiol (CBD) is a naturally-occurring constituent of industrial hemp (cannabis sativa) plants. It is the most abundant non-psychoactive cannabinoid found in cannabis and is being scientifically investigated for numerous reasons. Most people have heard of a cannabinoid called THC, which is the ingredient in cannabis that gets users high. Unlike THC, CBD (cannabidiol) is a non-psychoactive cannabinoid and does not cause a high.

How do I consume CBD?

The CBD oil we offer has a couple different applications. You can hold a sublingual dose under the tongue for 30-60 seconds (recommended for fastest absorption), apply the oil topically to your skin (can be applied directly to a problem area or mixed with your favorite moisturizer), or blend the oil in a health-conscious smoothie. CBD can be consumed in various smoking delivery devices and even applied with a patch.

What is the difference between CBD from Hemp and CBD from Marijuana?
Both hemp and marijuana are from the same genus and species (cannabis sativa). The characteristic of having low THC is the single difference that most rely on to distinguish industrial hemp from marijuana. CBD taken from hemp and marijuana is the exact same compound.
Will CBD help my condition?
Due to federal regulations, we cannot make claims about whether or not natural CBD hemp oil can help with specific ailments. We do however urge everyone to research the widely available information online. You can easily find many resources about CBD hemp oil and its possible benefits.
How does CBD affect my drug tests?

What does all of this mean for drug testing in the age of legal marijuana? According to Quest Diagnostics Director of Science and Technology, Barry Sample, CBD likely won’t show up on a drug test: “If the product contains only CBD and has had the THC removed, then an individual being tested would not be expected to test positive for marijuana or marijuana metabolite.”

According to the Substance Abuse and Mental Health Services Administration (SAMHSA), the recommended cutoff level of THC is 50 ng/mL to pass a drug test. Most employers and legal services prefer to use SAMHSA certified labs as the standard, since it’s more likely to hold up in court. Most hemp oil or CBD products are usually sold with much lower levels of THC (compared to marijuana), so most CBD consumers won’t have trouble passing a drug test. For those using extremely high levels of CBD or hemp oil (over 2,000 mg per day) it’s possible, though unlikely, that this could produce a “false positive” result on a drug test.

While research has shown that it’s unlikely that CBD products alone would lead to a positive result on a drug test, it’s important to note that CBD was found to interact with the body’s metabolism of certain compounds. What this means is that CBD users who also use marijuana may actually show higher levels of THC for a longer period of time than when using marijuana alone.

So, it would seem that CBD alone is not enough to raise any red flags on a drug test; although, if you’d prefer to err on the safe side, refraining from taking even CBD if you’re expecting a drug test is likeliest the best approach.

US Drug Test Centers is an industry leader in providing nationwide drug testing solutions for individuals and employers alike. To learn more about drug testing services, specialty drug testing, or to find a drug testing center near you, contact us at 866-566-0261 or order a test online.

How do you know how much CBD is in your products?

Our CBD oil is lab-tested as soon as it is extracted and then again by a third party lab, to ensure an accurate amount of CBD.

Is your CBD a whole plant extract, synthetic, or an isolate?

We would never sacrifice quality by providing a synthetic CBD or CBD isolate blend. We use a whole plant extract that is rich in cannabinoids, terpenes, and other beneficial oils. The Hadassah Medical School at the Hebrew University of Jerusalem sought to compare the effectiveness of a completely purified CBD extract versus a full-spectrum extract of cannabis flowers containing large quantities of CBD. The conclusion of the study was that the whole plant extract, which contained a large percentage of CBD but also contained traces of the other cannabinoids, proved far more effective than CBD-only solutions in alleviating inflammation and pain sensation.

When does the product expire?

Without refrigeration, the product will last for 12 months. Refrigeration is completely optional but will extend the shelf life of the product to 18 months.

What other ingredients are in your CBD oil?

Our CBD oil has only one ingredient, hemp! Our extracts contain 100% organic cold pressed hemp oil and our proprietary full spectrum CBD concentrate. There are no other additives, preservatives, emulsifiers, or flavorings.

Our CBD flower is grown locally and organically outdoors on Franny’s Farm and indoor with our greenhouse partners. Our CBD oil is extracted from organic hemp plants cultivated on Franny’s Farm in Leicester NC and licensed farms in Asheville, North Carolina, and throughout certified licensed farms in the USA. Our goal is to grow and source all hemp from right here in North Carolina in 2019. We are a collective of farmers growing organic, bio-dynamic and with natures best intentions. Franny’s Farmacy hemp is grown the way nature intended and harvested at peak perfection.

We strive to serve our customers with the best products possible. Read more about our process and products, and shop our entire line of high quality CBD products!